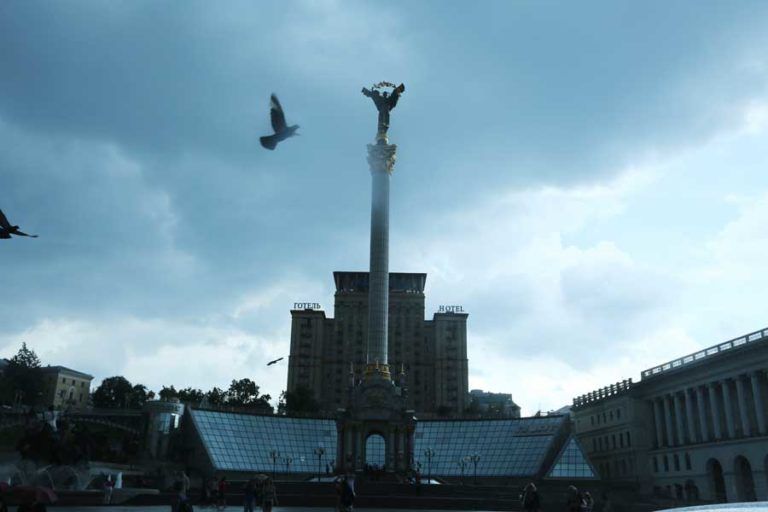 We met our driver, Vasyl, and guide/translator, Svitlana, at the airport. We soon realized we were in good hands as we headed to Hatikvah Synagogue in the Podil district of the city to meet with Rabbi Alexander Dukhovny, the Chief Rabbi of the Reform Movement in Kiev and Ukraine.

The Rabbi serves about 45 congregations in Ukraine — there are only two Reform rabbis in the entire country. Their main mission is to educate Jews, so they use a lot of lay people to teach and support the congregations. The Rabbi said the only time it’s a problem is when there is a funeral, since it must be conducted in a timely manner, so the lay people usually manage without him. He said he always attends weddings because they are “joyous affairs,” and sometimes celebrates b’nai mitzvahs with up to 20 children at a time.

Many Jews in Ukraine are reawakening to their heritage, given the Soviet Union’s many years of suppressing religious practice. That changed when Ukraine declared its independence in 1991 — there are currently about 10,000 Jews in Ukraine, although based on what we heard today, most are in the cities.

The synagogue is located on the fourth floor of a building once occupied by 15 Jews who were led away and massacred by the Nazis at Babi Yar. We stayed for part of the service this evening — it was a small group, but it sounds like they form a tight knit community.

We also talked with Uliya, the synagogue’s youth coordinator and Zhanna Burgina, a retired member of the congregation who used to lead tours for Jews visiting Ukraine.

Zhanna has been to Tetiev. She said no Jews live there now, but unlike some of the other small cities in Ukraine, the residents know about the Jews who used to live there and try to make sure the pogrom of 1920 is commemorated in some way.

One note: the three people we interviewed today all lost family members in the Holocaust. It was a grim reminder of the 1.2 million Ukrainian Jews massacred by the Nazis.

Tomorrow, we’ll have more photos to share as we go back to the Podil district, one of the city’s oldest. Prior to WWII, many Jews lived in the area. We’ll photograph an adult Bat Mitzvah at the synagogue and then head to the Babi Yar memorial.

„Many Jews in Ukraine are reawakening to their heritage, given the Soviet Union’s many years of suppressing religious practice.“

This site uses Akismet to reduce spam. Learn how your comment data is processed.